Trending Now
BetMGM says it hopes to launch online poker...
Online Poker | win2day.at: Es wird gejagt –...
review of the slot of the charming Far...
“I was shocked and asleep when I found...
The DOJ claims that Steve Wynn acted as...
Casinos in Saxony 2022 – was ist erlaubt?
Starting next weekend, the XL Spring Series on...
MicroMillions tournaments arrive on PokerStars, 128 low buy-in...
Selouan shines in another $ 25,000 SHR; Add...
Triton Poker Series Madrid, the € 50,000 NLHE...
Home IT Poker BVB vs occasional with Top Pair and wet board 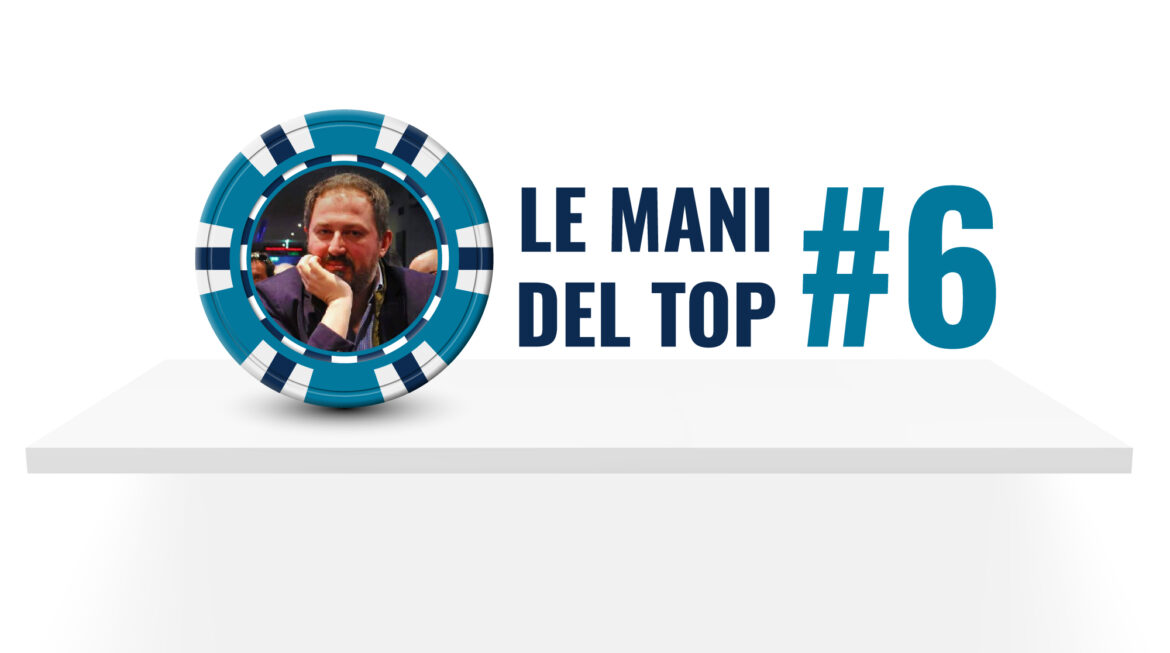 BVB vs occasional with Top Pair and wet board

The sixth episode of your favorite Assopoker column, “The Hands of the Top,” leads me to tell you about a commercial that happened to me last weekend that left me with many doubts about my conduct and that of my opponent.

We are, for once, in the late stage, with only one player at the end of the Final Table at 10. At my table it is played in 5, we are all In The Money for a long time and now begins that phase that will lead us to fight for best prizes.

I play Piccolo Buio with about 30 BB and my opponent in turn, we will call him Slurpis, he acts as Big Blind and he has about 35 in the dark.

Slurpis has not made a big impression on the table so far. In about fifty played hands I saw him that night, he technically did everything wrong, from limp out of place with rather embarrassing hands, disproportionate 3Bet size, call and fold to the limit of requesting an explanation…

I play with kqe, in BVB, I open my hand increasing the size a little from small darkness, 2.9, receiving the call of my opponent.

The hands of the Top: the shot

Flop (6.5 BB): 6 9 q. The size of my continuation bet is broadly reminiscent of the one I used for the pre-flop raise of about 3 BB. Slurpis calla.

Turn (12 BB) 10. With this size of the pot and all the value I should have on its range, I think I’m still ahead and I want to be called some draw and / or, above all, some pair found on that flop. Point 5.5 BB, oppo calla still.

On the river, struggling with a plate of about 22 BB, falls a 10 that pairs the board.

If I didn’t hurt my calculations I would have to pay a little less than 20x, which is less than a PSB and I decide to invest with a good chance of being ahead.

Slurpis thinks about it for a few seconds, then calls my All In final and turns this to 9 which was more or less what I thought would turn me on.

Let’s start with what I liked about the hand that is essentially in charge of Slurpis’ conduct up to that point.

On the flop, quite wet, with two flowers and a whole series of stairs that can be completed, I start to build the plate so that I can find myself on the river with a size that leads me to shove a correct quantum, which can represent a few bluffing hands. catchare and that you pay me worse.

Slurpis, on the other hand, takes a rather passive blow, as he often did before. On that board, he beats me really little, played that way.

Three calls from below are the exact essence of players like this.

Someone might turn up their nose at the size of the turn, which probably requires more protection (due to the already mentioned flower and scale draw), at the expense of calculations to get to the shove with less than a Pot Size Bet.

The main reason for his hand is his rather resigned way of playing, which will lead him, however, to come out just like a bubble of the FT.

I usually open a little wider from UTG and Small Blind for similar reasons, which I’ve always considered standard in my life as a live player.

From UTG my range has always been quite solid, although in recent years I have had to open it for obvious reasons: you run into pretty sensible players who have started to make aggression their dogma and if once it was enough to close to trap the less be careful, it’s not enough today.

For the same reason, but in order not to give odds to the entire defensive range of the Great Dark, I get out of my standard raise 2.2 / 2.3 in BVB.

In this eternal struggle against the terrible children of online children, it is necessary to say your own, otherwise you end up in the common story of too closed players, such as the phrase Mike McDermott in Rounders, he teaches, “If you’re too careful, your life will be a mess.”

For everything else, opinions are always welcome.

The Hands of the Top

The rubric “The Hands of the Top” is not a way to impose my thoughts, anything else. Hands have been played in contexts where significant prizes are NOT played and there are no levels of thinking that should lead us to clash verbally.

It’s a way to grow together and, if you want, give some feedback on it, without having to scan the best or the poorest. In fact, I’ll tell you right away, that’s how we cut off the bull’s head: I’m the poorest and I want to keep learning.