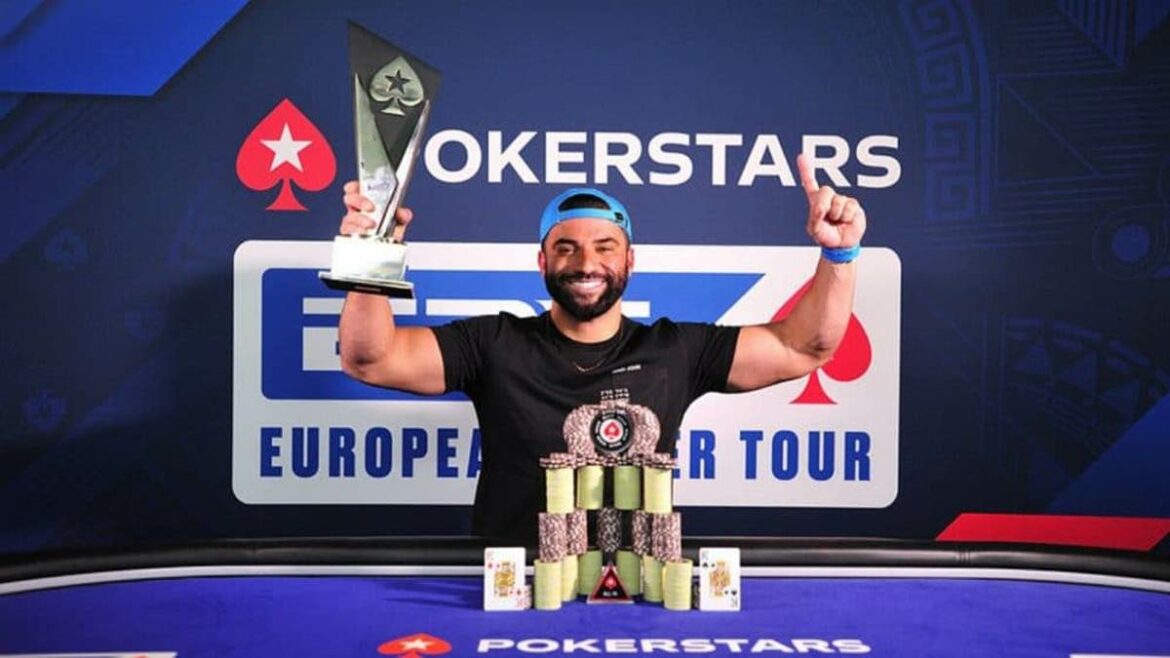 A year ago we interviewed him for his remarkable climb to high levels in Italian online tournaments, this time instead we celebrate a great blow touched by Fabio Peluso in a big live spotlight. The Apulian player has long cherished victory in the France Poker Series Main Event, which ended last night at the Monte-Carlo Casino®️, at the EPT festival.

Fabio Peluso, an exciting march at the end of the FPS table

Peluso started with the third of the six stacks still in the running, but the most important day so far in his career immediately took a bad turn. The blue paid half the stack to the player who will compete for the victory until the end: Lucas Scafini. The Brazilian capitalizes well on a floppy set, which then becomes full on the river. In this blow Fabio loses about 5 million, remaining with 5.6 million.

Meanwhile, chip leader Amsellem is starting to lose ground. The Israeli is also unfortunate in more than one circumstance, although perhaps this balances some lucky blows he had in the previous days, first of all the one that cost the elimination to the Italian Peralta. In any case, luck gives way and fate takes away: the Israeli loses a KL vs 88 all-in preflop by Francois Vincenti, who finds one of his 2 outs on the board.

A little later Amsellem takes another loud burst, with aa vs kq. Here too the shot is an allin preflop, and after the flop 8 7 4 Amsellem seemed to be in an iron barrel, having about a 97% chance to win the hand, against more or less a 1.5% to split the pot and another 1.5% to lose. That one and a half percent was all backdoor solutions, that is, with the help of both the turn and the river. Not to mention: turn qe river k draw the incredible explosion.

The day then takes a definite nightmare turn for Amsellem, when the Israeli ends up with Fabio Peluso in a 3-shot preflop shot from the blue. He goes to the rest on the flop 10 9 3, and Fabio discovers that his aa is behind the 10 10. The turn is a q but the river closes a set over set that makes the blue scream. For him, a fundamental doubling that brings him to almost 24 million, while Amsellem comes out 5th for 71,310 €. Shortly before it was Vincenti’s turn, sixth for € 54k.

Fabio unleashed, you earn heads up

Only a few minutes pass, and Fabio Peluso repeats himself. This time his victim is the Hungarian Nagygyiorgy, who succumbs from short with k 10 in allin preflop against 9 of the Italian. Nagygyorgy finds a K on a flop that is monotonous spades, but the fourth spades card on the turn condemns him to the exit. Tibor Nagygyorgy is fourth for € 94,130, but above all Fabio Peluso stretches to the top of the tournament, now exceeding 33 million which means holding about half of the chips in play.

And it is always the wild Peluso who throws out the third place. Florian Guimond was short at just over 10bb and sends them all with A9. Fabio pins KK for the most obvious of calls, and also finds another king on the flop to close every speech. Guimond settles out in third place for € 124,250 and starts a very promising heads up for the Italian colors:

Scafini overturns everything, but there is the deal

However, the Brazilian starts with a big decision and not only closes the gap with several small and medium dishes, but also manages to overtake, going up to 35 million against the 22 and a half of the Italian. Here the two ask for a break to discuss a deal that is found soon enough. So you play for a first coin of 250 thousand euros, while the second will collect 217,340 € (originally the payout allocated about 290 thousand euros to the winner and about 176 thousand to the runner up).

Peluso still manages to regain the same advantage as the beginning of the head-to-head, but unfortunately the illusion does not last long. In a war of preflop raises, the two end up with the rest, with Scafini dominating thanks to his pair of 10, over the pair of 5 of Peluso, which drops to 22 million against 35.

Fabio Peluso tries to stay attached to the match, but then comes the cooler that puts an end to everything. Remaining with about 14 million on blind 600,000 / 1,200,000 before 600,000, Fabio sends everything with jj, but finds the Brazilian very ready to call with kk. The board does not turn upside down and the final table closes as follows:

Despite a predictable bitterness for the victory, Fabio Peluso closes with the best result of his career in live tournaments. Hopefully it doesn’t stop there, but we’re sure that the experience of the France Poker Series will remain in his memory for a long time to come.