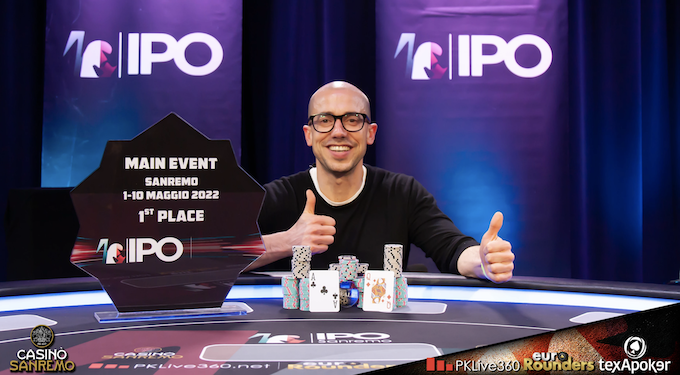 Gioconews Poker – Andreini wins the richest IPO ever in Sanremo out of 3,762 entries

Carlo Andreini beats Federico Fecchio heads up and becomes the champion of IPO Sanremo 2022, the richest in the history of the tournament.

Sanremo – Carlo Andreini put his “nose” in front of 3,761 opponents of a tournament that crashed the guaranteed 1 million euros exceeding 1.7 million and ended in the night after a long final day started at 13 and finished at 5 the next morning. The IPO Sanremo 2022, therefore, is won by this furniture dealer from Lucca, 42 years old, and who, when he joins the square, has great results: PkLive360.net Andreini – I have a beautiful partner, a small child and I don’t have time to play so many tournaments either live or online “. It is good to rethink the plan, however, given the excellent results it always gets as that wonderful third place to a Pgp Saint Vincent of many years ago when Alessandro “Wodimello” De Michele won: “Yes, it’s true, it was a great result. September 2011 and won 37 thousand euros. In fact, I was 80th even three years ago here in Sanremo when Alessandro Scermino won and I found myself at the table “.

So his release must have been a relief? “I was much more afraid of Palandiuk and Tocci but only because I had played more and Scermino had never touched him these days. But of course he was a very uncomfortable customer. ”
Now what will Carlo do with such a sumptuous first coin? “I don’t think I will intensify my outings and my schedule very much given the reasons above – explains Andreini – the family is always in the first place and this money will be used for our future. In the end we dealt with Federico Fecchio for 240 thousand and 200 thousand in the first and second “. A further adjustment was made at the beginning of the final table when Fecchio eliminated his friend Luca Guglielmoni, always with JJ, in a particular handshake during these long days of IPO. Guglielmoni had come out with 50 thousand euros and all the prizes were richer.

THE ACTION OF THE FINAL TABLE – Let’s take a step back to the final day to highlight how Michele Tocci of BetBull.it succeeded in a crazy escalation of 3 million chips when the average was over 7 million, to return to the final table tv among the first stacks of the decisive late stage. While Andreini, who started at the helm of the 21 left, gets to the final table in a rather good way
That said, we start immediately with Rachedi eliminated by Fecchio who with QQ opens and calls the 3betshove of the Frenchman who sent everything for 9.1 million with a pair of 10. The board is an Ace high that also opens some possibilities of scale for Rachedi who they reset themselves with a 4 of flowers on the river. Fecchio is now firmly in command.
It will take a long time to get to the elimination of Giovanni Agliozzo as the shorts continue to double and fight including the future winner Andreini while Scermino tries to place himself in a position of advantage to try to repeat the title of three thousand years ago from 220 thousand euros. Andreini manages to double against the equal stack Palandiuk 77 vs 10 by also hitting a 7 on the river and reducing the Italian-Ukrainian former elite supernova, to 975 thousand tokens, practically a dark and a half. But his chase is amazing and he manages to double and then limped Agliozzo AQs in check against JJ. The board gives 7-10-8 with 10 pictures, with turn K and river J which is pictures and closes the trio for the Italian but the real scale for Palandiuk.
It will then be Lege to bust Agliozzo Q8 vs A10s with flowers with the 10 coming out on the flop but also a Jack and a 9 for the French ladder. The showdowns continue to be crazy.
Tocci always remains deep but fails to direct the tournament and loses a flip 33 vs AQ and Q on the turn that makes Law always more and more on the roller coaster. Shortly afterwards, in fact, Andreini manages to catch a 7 on A7 vs A9 and returns to 22 million after being pushed for a long time due to his ridiculous stack.
The structure is always great but you can see a few 3bet and 4bet even if Scermino and Tocci clash JJ vs 99 with Michele who opens 1.8M, Scerminator 3betta 5.8 million and Tocci plays.
Flop: 565 with two spades and Scermino still comes out 4M, call Tocci.
Turn: 9 flowers that can kill Scermino who continues to throw 10M and still calls Tocci.
River: In check, he sends everything Tocci on Scermino’s check and in the end he wins the pot by limping the Modena player in search of the sensational back to back, even after 3 years.

Fecchio, meanwhile, wakes up after losing half a stack in a series of shots and Palandiuk AK vs QQ envelope and drawing the Kappa as the second card on the flop.
Scermino is getting shorter and shorter at a certain point, he often finds himself forcing the rest as when he sends everything with A3 to spades from Utg for 9.1M and finds Fecchio’s call from small blind with KJ offsuited and Andreini’s call also with A10 offsuited. He splits on the board with Fecchio who puts the money back in the middle for the benefit of the two players. Scermino remains short but his time has not yet come. Andreini’s victory goes to the elimination of Alessandro who goes all the way with A3 and is called by K2: 2 on the flop and Scermino comes out fourth. Shortly before, the French law had come out short.
At the three way stage, the decisive blow comes when Tocci plays a good part of the stack with heartfelt A3s against Andreini who has the black AA.
The flop is 9Q3 with one heart, at the turn comes a 5 of hearts that opens further scenarios to Tocci who sends everything for 66 million and Andreini calls. At the river a 5 of flowers that does not save the player of BetBull.it that limps to 25M and the Lucca flies to 94M.
It will take a few hands to eliminate Tocci who was about to recover AJ off against A8s with Andreini flowers catching an 8 on the turn.
After the further adjustment in heads up we start with a chip ratio of 5 to 1 in favor of Andreini who in the end also closes a full house AQ vs 44 against Fecchio and becomes the champion of IPO Sanremo.

The original payout of the first nine players, although the adjustments and statements of the winner Andreini must be considered, who also confirmed the final deal against Fecchio: