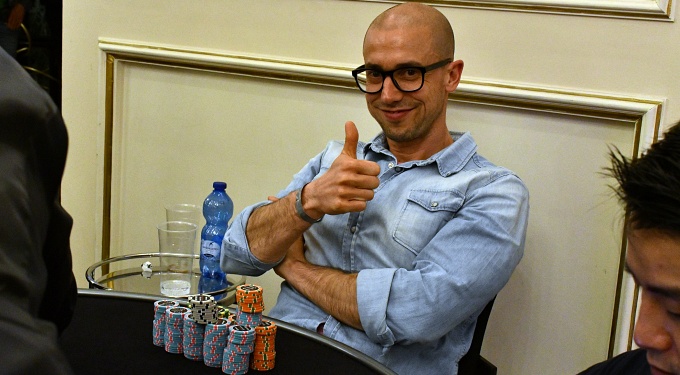 A final day of 21 players at the IPO Sanremo of records that sees Carlo Andreini at the top with about 13.4 million chips.

Sanremo – You expect the Guglielmoni and the Fecchio and, why not the Scermino and, in the end, to climb to the top of the day3 count of the IPO Sanremo of records (remember the 3,762 entries for 1,732.77 euros totaled at the main event with 21 players left), silent silent but with several hands won, won the chip leader with about 17 million tokens Carlo Andreini. Following him, in fact, was a tremendous couple made up of Luca Guglielmoni with about 13.4 million and Federico Fecchio, a well-known Piedmontese face of Italian live poker. In the top five keep an eye on Palandiuk but especially on a certain Alessandro Scermino who won the only edition of IPO ever played at the Casino of Sanremo now in April 2019 when the former winner took home 220,000 euros. He dominated the count for most of the second half of Day3. For the former IPO winner, however, there are 10.4 million tokens.
To draw a watershed, we point out that the average tournament is 7.1 million chips with Percossi, Peluso, Knudsen and Lege above average. Just below a super Alessio Astone who is practically average.

THE ACTION OF THE FINAL PHASES – But let’s go back to the last levels of the day. The final day was “bubbled” by the excellent Angel “MellowYellow” Brown who in bvb against Knudsen goes to the rest 1010 vs AK and a K on the river makes the foreign player rejoice who sends home the young grinder online. A player who could give a lot more and who advises us to follow his coach, Daniele De Feo: “He is one of the most promising talents in online poker and is winning a lot in this first half of 2022!”, Says “Defeanu”.
In the final hands, a great shot by Astone that fits in with AQ vs Q2s with hearts that doesn’t focus on the flush and pays the bill to Alessio, who will close almost on average.
At the table of Fabio Peluso we arrive on a JJ5 rainbow board with the cbet in Guglielmoni from small blind for 550,000 while the same runner up of the main Fps Monte Carlo 2022 raises to 1.3 million. Luca folds saying: “I was stupid, I know you’re white but I don’t want to play a hand like that now, I’m tired.” In the end Peluso shows him a 2 of spades and flies above average.
Also at the last level, Percossi’s excellent shot at Hu Lulei, who opens the 350,000 button and calls Percossi from the small blind.
Flop: QJK, check, 280,000, call
Turn: 7 flowers, check for two
River: 3 flowers, check, Hu Lulei unravels 900,000 and Percossi calls winning KJ vs 10J.

the NOTABLES WITHOUT FINAL DAY – Unfortunately there are many well-known faces that we lose like Ivan Losi who, now short sends all J9 against the KQ of extermination that takes des the K that the jack.
We lost a sure protagonist of tournaments like these like Andreino Benelli who was bluffed on a shot and Peluso shortened it further when he closed the scale from 3 to 7 with 3-4. Then he sent everything with A8 and found no help on the board,

Out also a reg of IPO like Predrag Budakovic who fought for two days against his situation as a “card dead” and then came out with a standard shot AQ vs 1010.
A small note of color, there was also Cristian Scalzi, a well-known Tournament director from Sanremo who came out 87th: “For once I played I had a lot of fun. Of course, if I look at the first 320,000 euro coin, I’m not so happy to have won 2,000 euros “, jokes Scalzi.

Top 9 prizes and their payout: