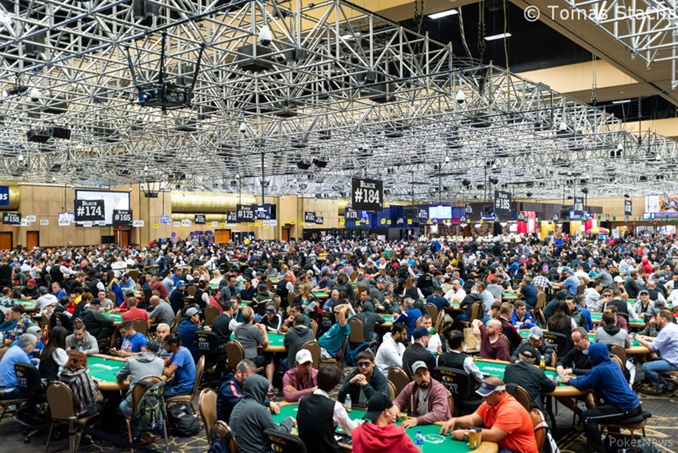 Gioconews Poker – The Russians out of the World Series of Poker? The debate is open but no decision has been made so far

Should Russians be banned from the 2022 World Series of Poker for the 2022 event? The opinions of the players based on the moves of other sports and online rooms.

Will Russian players be banned from the World Series of Poker? The issue is starting to be debated on the 2 + 2 forum given the ongoing actions against Russian athletes as part of the sanctions decided to punish the Russian invasion of Ukraine. And given the measures taken by many international poker rooms to leave the Russian markets, many users have been led to believe that Russian players will not be accepted by the World Poker Championships. However, there are many tournaments and live events that have accepted players living in the country led by Vladimir Putin.
Rightly so if we consider poker a sport there is a risk that even important events such as the World Series will be involved in these decisions.
In this, Russian athletes have been suspended from almost all international competitions in hockey, skating, athletics, basketball, football and many other sports. In addition, international competitions in the Russian Federation have been moved to other countries. Like the European Curling Championship transferred from Perm, the World Volleyball Championship has moved to Slovenia and Poland, the Formula 1 Grand Prix in Sochi will not take place (contract resolved) and all stages of the World Cup cross-country skiing they are sent back to Tyumen.
Western athletes refuse to compete against Russian athletes. The best that sports federations can offer Russian athletes in such a situation is to compete under a neutral flag without an anthem.
Until recently, tennis was one of the few sports in which Russian athletes could compete. Last week, Wimbledon organizers suspended tennis players from Russia and Belarus.
So far live tournaments have allowed Russians to participate but partypoker has closed the game for Russia and Belarus, there are limited Skrill features for Russia and Belarus, PokerStars and 888poker have left the Russian market and SharkScope no longer offers Russians 5 free searches per day.
Now on 2 + 2 on the basis of all these facts try to discuss whether the Russian players will have to participate in the events of the world championships.
Pokergaga says “the Wsop should ban the Russians, but this will not happen this year.” Wilbury Twist: “Difficult question. In sports competitions, sanctions are imposed on the country, or rather on its sports federation. Yes, this ultimately affects individual athletes, but the punishment is still felt collectively. In poker, the Russian ban will be directed exclusively at individual players. The Russian Federation does not have a poker team, as in the Olympics. ” Ironic dude45: “Oh yes, banning the Russians from the WSOP will surely put Putin in his place.”
Realistic smoothcriminal99: “Putin and the war as a whole are supported by a much larger percentage of the population of the Russian Federation than it seems. But those who can travel or simply get information from outside news sources are more likely to be in opposition. Why punish these people? ”

madlex said “most Russians, the opportunity to travel is currently not available as such. They already have to go to another country to get a visa, since most embassies have closed. So at Wsop we will most likely see guys who have already moved to other countries and continue to play online, not those who still live in the Russian Federation. “
Ejames209’s thesis is a bit absurd: “I think the WSOP should do much more to help Ukraine. Imagine if a Russian won the Main Event and then returned home to spend money that would later turn into fuel for Putin’s war machine. Does Matt Savage (director of the Wsop tournament) want to contribute to the resulting bloodshed? Time will tell. “
Dream Crusher shares this view: “I think the Russians are wonderful people and I am not in favor of banning them from the Wsop. But at the same time, I understand any ban against the Russian Federation by any Western company. Yes, the Russians will be unpleasant, but this is life when you have a tyrant. “
Very harsh conclusion with threebanger: “Yes, of course, we should ban all Russians from entering the United States, as well as the Germans for helping Hitler. Oh wait … Just a stupid idea. “