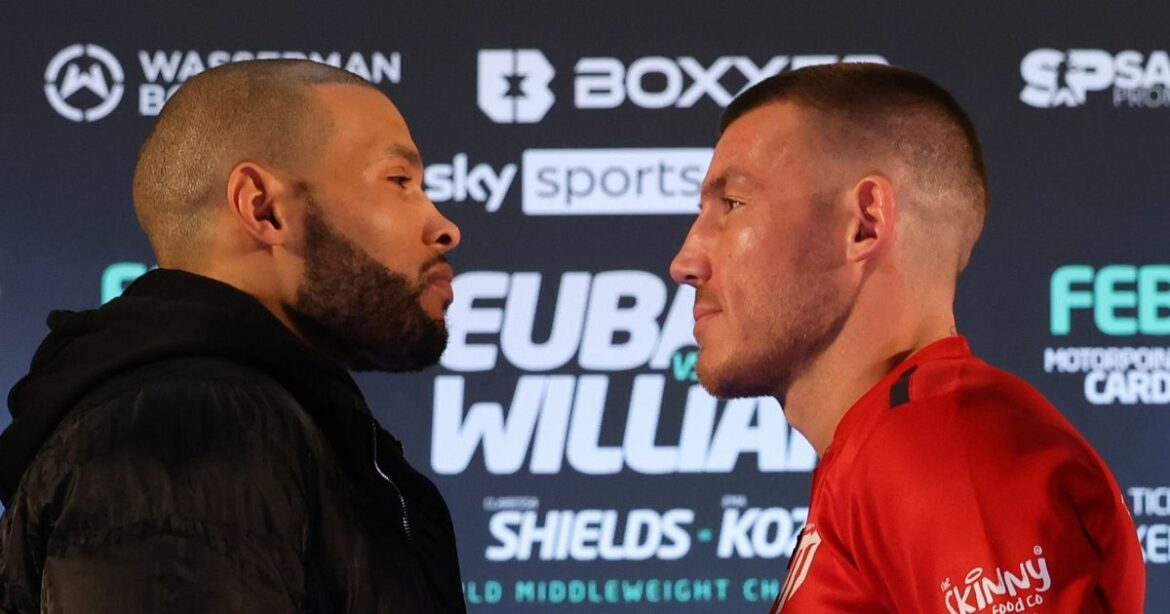 Chris Eubank Jr and Liam Williams will go head-to-head in an attempt to clear the middleweight field. The ambitious pair hope to become the division’s main title challengers

Bitter spats between the boxers give the match that little extra edge ahead of the two fighters going head to head in peak physical condition.

There is no love lost between the pair and they’ve exchanged some choice words ahead of the big match, which takes place on Saturday February 4.

As reported by the BBC, Williams said: “I am so, so excited to put an end to this guy. Drop him down a few levels and maybe he’ll realize his level after this fight.”

Eubank Jr., 32, remained calm in the face of the jibes and said that it is “styles” that win fights.

The son of the champion boxer said: “Styles make fights and I believe me and him have the styles to make an exciting fight, epic even.

“I can’t wait to get in there and prove the doubters, the haters and the naysayers wrong, as usual.”

Here is everything we know about the coverage and build-up to this fiery boxing bout.

How do I watch Williams vs Eubank Jr?

Sky have TV coverage of the boxing bout (

The big fight between Williams and Eubank Jr. will be broadcast on Sky Sports Main Event and Sky Sports Arena. You can also access 24 hours of Sky Sports via NOWTV for £ 9.99.

Coverage starts at 7:30 pm and ring walks are expected to be at 10pm on Saturday.

Radio coverage or those unable to sit in front of the TV can follow on live text, BBC Sport website and app from 8pm.

The final face-off is on today – Friday, February 4 – and people can watch a free live stream on Sky Sports’ website, app and social media.

Where will Chris Eubank Jr and Liam Williams fight?

Eubank Jr will have to face a baying Cardiff crowd (

Williams, 29, will face his home crowd hoping to make an improvement on his last performance.

Challenging for the WBO middleweight title, he was beaten by a unanimous decision by Demetrius Andrade in Florida in April 2021.

Calling Williams “a bad representative of the sport,” Eubank Jr. said to Sky Sports: “We are in his back garden. But we are feeling strong and fit. I am very motivated.”

Will there be a rematch between Chris Eubank Jr. and Liam Williams?

Words exchanged between the pair may just lead to a rematch (

Eubank Jr. is known to have a rematch clause, which caused further mockery from Williams

“Chris has a rematch clause for this fight. He obviously doubts his ability a bit and thinks I can beat him,” he said on February 3.

The pair are two of the more obvious contenders to challenge for the middleweight titles in the future.

Free PokerStars in Greece with poker, betting and online casinos

The most successful Metaverse is … a virtual casino in Decentraland