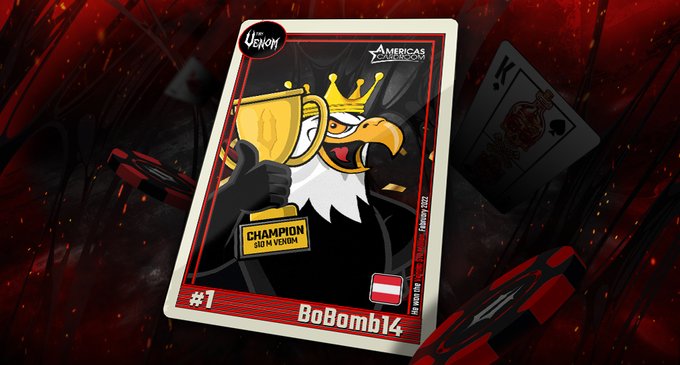 With 3,782 tickets, one was under the $ 10,000,000 cash prize guarantee. While the ACR does not have much German-speaking participation in regular tournaments, many do not miss an event like Venom. There were also numerous German-speaking players in the front rows, and three reached the final table. The leader of the chip was Anton “100kundenrisk” Morgenstern, the Pokercode Grindhouse guys Stefan “Bomb14” Nemetz and Mario “livinmydream” Mosböck started from ranks 5 and 7.

Mario was eliminated in rank 7 when he ran with 8 pockets against the ImHereToFold Kings. Mario received a total of $ 230,790 in prizes. Gradually, the ranks narrowed and Aton “100kundenrisk” Morgenstern and Stefan “BoBom14” Nemetz finished up. Anton had held the lead for a long time, but Stefan Fracois “SeT4x4” Pirault eliminated with and entered the heads-up against Anton as chip leader.

Stefan Nemetz continues the triumph of the Pokercode Grindhouse boys. Together with his friends Mario Mosböck, Roland Rokita, Matthias Auser, Florian Fuchs, Fabian Bernhauser and Florian Gaugusch he moved to Pokercode Grindhouse in August / September 2020. The three weeks of intensive training were worth it, because the guys have made millions from the Grindhouse, both live and online. Among other things, Roland Rokita also reached the final table of Venom last May.

Online Poker | GGOC: No Glory for the...

Mega-Action in the late Mai Woche