Trending Now
BetMGM says it hopes to launch online poker...
Online Poker | win2day.at: Es wird gejagt –...
review of the slot of the charming Far...
“I was shocked and asleep when I found...
The DOJ claims that Steve Wynn acted as...
Casinos in Saxony 2022 – was ist erlaubt?
Starting next weekend, the XL Spring Series on...
MicroMillions tournaments arrive on PokerStars, 128 low buy-in...
Selouan shines in another $ 25,000 SHR; Add...
Triton Poker Series Madrid, the € 50,000 NLHE...
Home US Poker PokerGO publishes the 2022 WSOP Live Streaming Program 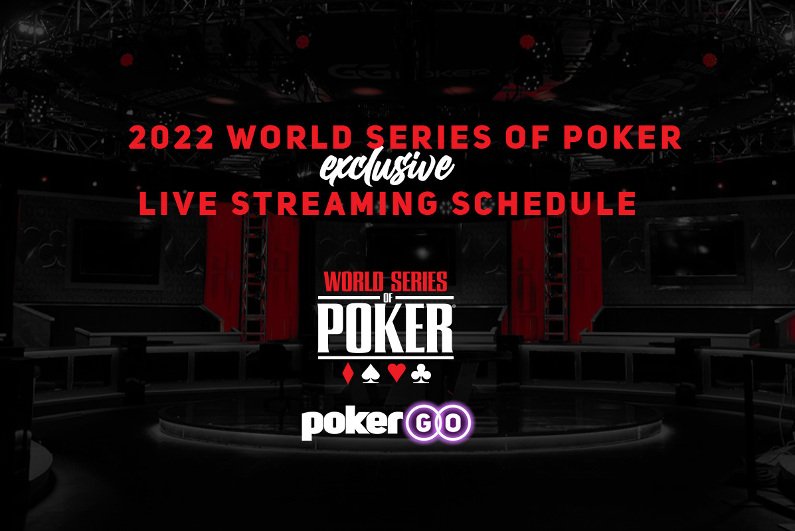 The 2022 World Series of Poker (WSOP) is less than four weeks away, and while most of us will not have the opportunity to attend in person, we will have the opportunity to see much of the action in line. On Thursday, PokerGO released its live streaming program for the holidays, which includes coverage for 21 events, including, of course, the $ 10,000 main event.

PokerGO did not provide details on the exact broadcast schedule of the main event, but simply listed the dates during which the tournament will take place: July 3-16. To be fair, however, no schedules or other details were recorded for any other event. PokerGO did emphasize the final table dates, which are of course the days when most fans will tune in. The nine-handed final table will begin on Friday, July 15 and will feature four players. The champion will be crowned on Saturday 16 July.

Last year, the WSOP ended its television broadcast relationship with ESPN by moving its cable coverage to the CBS Sports Network. PokerGO, however, was still the leading provider of live content and little mention was made of CBS coverage or program for this year.

In the early years of the poker boom earlier this century, ESPN offered coverage of many other events in addition to the Main Event. But in the following years, coverage was reduced to only the main event and sometimes to one or two major events, such as the $ 50,000 Poker Players Championship. Poker fans who enjoy a variety of non-Hold’em games should like PokerGO’s programming for the other 20 events.

PokerGO is a paid subscription streaming service, available on your mobile browser or PC, Android and iOS mobile devices, Roku and Amazon Fire TV. Subscription options are $ 14.99 per month, $ 29.99 for three months, $ 99.99 for one year. New subscribers can also use the code “WSOP30” to get a $ 30 discount on the annual price.

Playback coverage begins June 2 with the $ 100,000 High Roller Bounty No-Limit Hold’em event. It should be fun to watch, as not only are the bets high, but each player has a reward in their head, so the action should be exciting. The final event that PokerGO will broadcast live is the WSOP Tournament of Champions on July 20th. The OCD is a $ 1 million invitation-only freeroll for all winners of this summer’s bracelets and the winners of the 2021-2022 WSOP circuit gold rings.

The WSOP is entering a new era

This is a year of change for the World Series of Poker. Since 2005, the WSOP has been held at the Rio All-Suite Hotel & Casino on Flamingo Road, west of the Las Vegas Strip. It was a solid location, easy to get to, with ample parking and plenty of tournament space in the convention center.

However, there have been rumors for years that Caesars Entertainment was looking to move the WSOP. That move was inevitable when Caesars sold Rio in September 2019 for more than $ 500 million.

The COVID-19 pandemic forced the cancellation of the World Series of Poker 2020, except for one major last-minute hybrid online / live event. Last year’s 2021 WSOP was pushed into the fall, still in Rio, but this year’s poker festival has returned to its usual schedule from late May to mid-July.

for the first time, the World Series of Poker will be on the Las Vegas Strip

And with the 2022 WSOP finally comes this change of venue. For the first time, the World Series of Poker will be on the Las Vegas Strip, co-hosted by Paris Las Vegas and Bally’s Las Vegas, the latter of which will soon be renamed Horseshoe Las Vegas. While it will probably be a little harder to drive to the WSOP, the central location on the Strip will make things easier for fans and give players more affordable hotel options.