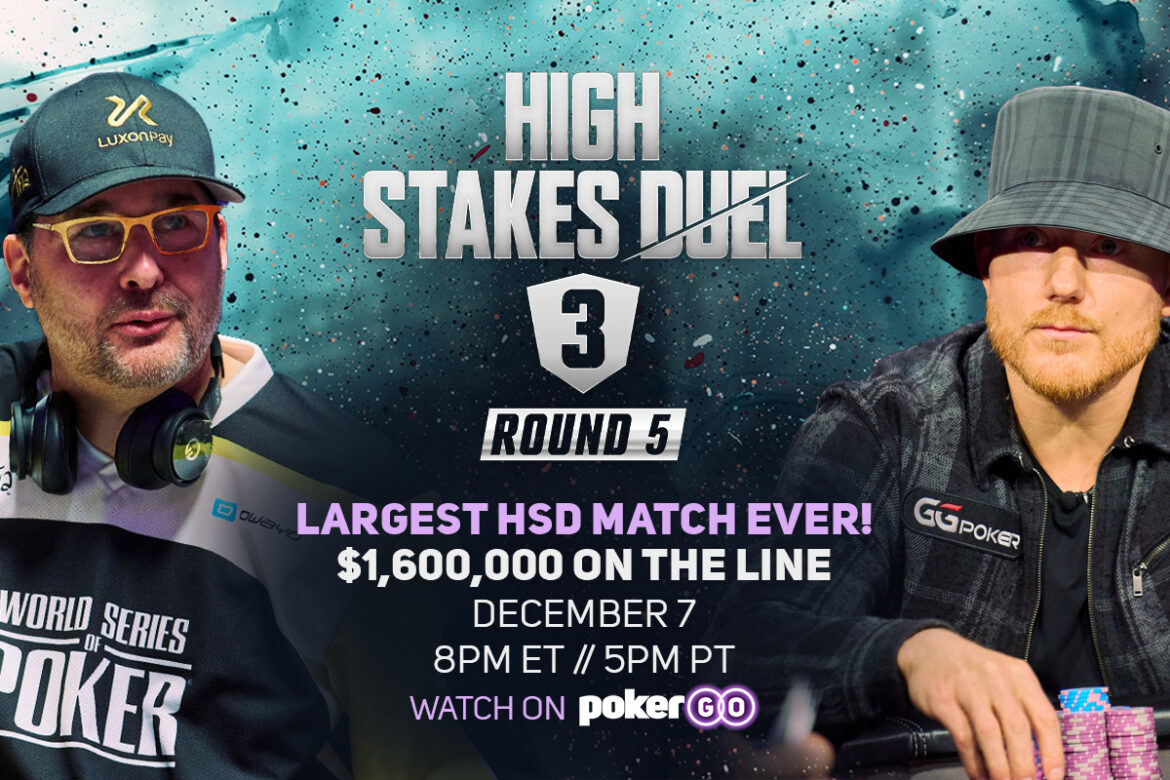 What you need to know about Phil Hellmuth vs. Jason Koon Match for $1.6 million on December 7th

Finally, a date has been set for the long-awaited $1.6 million High Stakes Duel III match on PokerGO between Phil Hellmuth i Jason Koon — December 7th at 8pm ET.

Hellmuth was originally scheduled to face off Scott Seiver in a rematch in August but his rival done back at the last minute for undisclosed reasons. A few days later, Koon was chosen as the current team’s Round 5 replacement High Stakes Duel games, but the date had not been revealed until now.

What is at stake?

Although the prize pool for Round 5 will be $1.6 million (each player will collect $800,000), the stakes are not the same for both players. If Hellmuth wins, he could cash in and collect the seven-figure payday. But if Koon is victorious, he won’t technically win anything…yet.

Each series of games begins with two players paying $50,000 to participate. The pot is doubled each round and the losing player or new challenger is always the only player responsible for re-buying. Players cannot cash out until they have won three matches in a row.

Round 5 began with Hellmuth defeating the recreational poker player and FS1 sports talk. Nick Wrightwho refused a rematch. Tom Dwan then stepped in and dealt Hellmuth his first loss in seven games in the High Stakes Duel. The two poker legends battled it out again in Round 3 ($400,000 pot) with Hellmuth getting his revenge.

Dwan couldn’t make it to Las Vegas in time for Round 4, so Seiver stepped into the hot seat and lost, setting up what was supposed to be a rematch for $1.6 million. As stated, that never happened, leaving the door open for Koon, the GGPoker Ambassador.

If it goes the other way and Koon wins, Hellmuth would have the option to force a rematch, and then he’d be the one who paid $1.6 million to get into Round 6. But if he loses and then decides to leave the game, PokerGO would then look for a new challenger.

Names that have surfaced among those interested in competing include Dan Cates i Phil Ivey. But the player selection could change if Koon is the opponent compared to Hellmuth.

Hellmuth has a 9-1 record in High Stakes Duel since 2020 when he first defeated Antonio Esfandiari in three consecutive games. Then he did the same Daniel Negreanu before beating Wright, going 1-1 against “durrrr”, and surpassing Seiver in May 2022.

The next two High Stakes Duel competitors are among the most accomplished poker players in history. Hellmuth has 16 times World Series of Poker bracelet winner, a record, and has more than $28.4 million in tournament cashes, according to Hendon Mob.

Koon, on the other hand, has been one of the most consistent and dominant high rollers of the last decade. With $40.2 million in live tournament cashes, the West Virginia native ranks seventh all-time. He won his first WSOP bracelet in 2021, fittingly in a $25,000 tournament.

Both players have had success in the heads-up sit ‘n go format, the style played in High Stakes Duel. Not only is Hellmuth 9-1 on HSD, he defeated the now-defunct 64er. NBC Heads Up Championship in 2005 and finished runner-up Mike Matusow in 2013.

As has been the case in most of his HSD matches, Hellmuth is likely the underdog based solely on his critics constantly trashing his game, while few do the same to Koon. But their 9-1 record, albeit a small sample, shows it won’t be an automatic win for the GGPoker ambassador