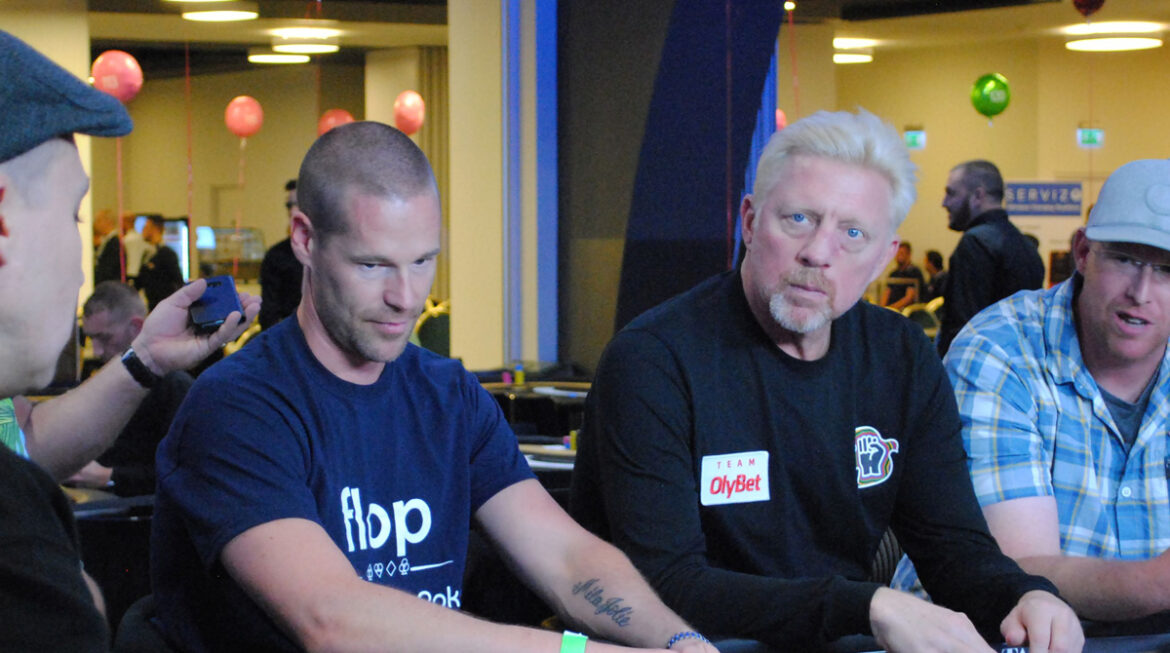 There are stories that, reread at particular moments, appear in a completely different light. For example, remembering today that Boris Becker was able to become a testimonial of two of the world’s leading poker brands is almost tender, given the recent news about the former German champion. Becker ended up in jail, where he is expected to stay for about two and a half years due to fraudulent bankruptcy.

The former “Bum Bum” pays a prison loan of 3.5 million not returned to an English private bank. Not a very clever thing, in short, but we are talking about a man who not only managed to burn about 50 million dollars earned in his career, but also went heavily in the red. But how did Boris Becker end up in the poker world?

The link between poker and (former?) Athletes

Poker has always had a special appeal for athletes and former high level athletes. For the latter, the attempt is usually to bring to the table the competitive spirit that had characterized them in their respective careers, breathing a new kind of adrenaline. Another issue concerns the active champions who, over the years, have played the role of testimonials for poker rooms. Think of Cristiano Ronaldo, Gigi Buffon, Neymar and Rafa Nadal, for example. For them, however, it is more simply a way like another to monetize the brand created with their competitive activity.

Going back to the old glories, we remember the presence of Alberto Tomba at the first EPT played in Italy, in 2008 in Sanremo. However, Albertone’s was just an infatuation, as at the time PokerStars had already placed him under Boris Becker.

The Boris Becker poker testimonial, from PS to Party

What could be the strategy of hiring a tennis champion who retired almost 10 years ago? In all likelihood, to attract a fairly mature target of fans, say between 30 and 50. And there was also a considerable curiosity about the performance at the table of the blonde, but they were soon disappointed. Boris played an indefinite number of live tournaments (pictured above with one of his last appearances, along with Patrik Antonius) and his only notable result was a 40th place finish at the 2009 25k WPT Championship, for a prize pool of about $ 40,000. For the rest, many anonymous outings, alternating with at least unorthodox plays.

In 2013, Becker announced a move away from poker “to focus on other businesses.” Rereading it today has an almost comical effect, with all due respect for the human drama of a person who is seen ending up behind bars. The problem is, however, that Boris would probably have done better to continue playing poker, albeit somewhat at random, given the huge damage he has been able to combine in many other areas. We already talked about his bankruptcy in 2017, but in the meantime his poker experience had already been enriched with a new adventure.

In 2016, to everyone’s amazement, PartyPoker hired him as a testimonial. If his appeal was already shaky in 2008, let alone 8 years later. Of course, on the other hand, we are talking about a man who has been in the news almost uninterruptedly since he became the youngest winner in the history of the Wimbledon tournament at the age of 17. Primacy, this, which still belongs to him. The marriage with Party lasted less than the marriage with PS, also because BB’s legal and financial troubles began to chase him insistently.

Was it better to play poker?

Today his reality is the sad one of the prison in Great Britain, where he will have to stay for about half of the 30 months of imprisonment imposed on him. The rest can be discounted on probation. His sad parable as a former champion may have surprised some, but certainly not in Germany. In his hometown “Bum Bum” he was never considered a business genius, to put it mildly. Let’s just say that even when he was active, he was considered little more than a puppet outside the box. We hope this experience is useful to the 54-year-old former champion. Maybe one day we’ll see him at the table again, hoping that in the meantime he’ll learn the game well. After all, learning poker well can be crucial to getting started in business without hurting yourself.

Are there only a few multinationals in the online casino market that dominate it?