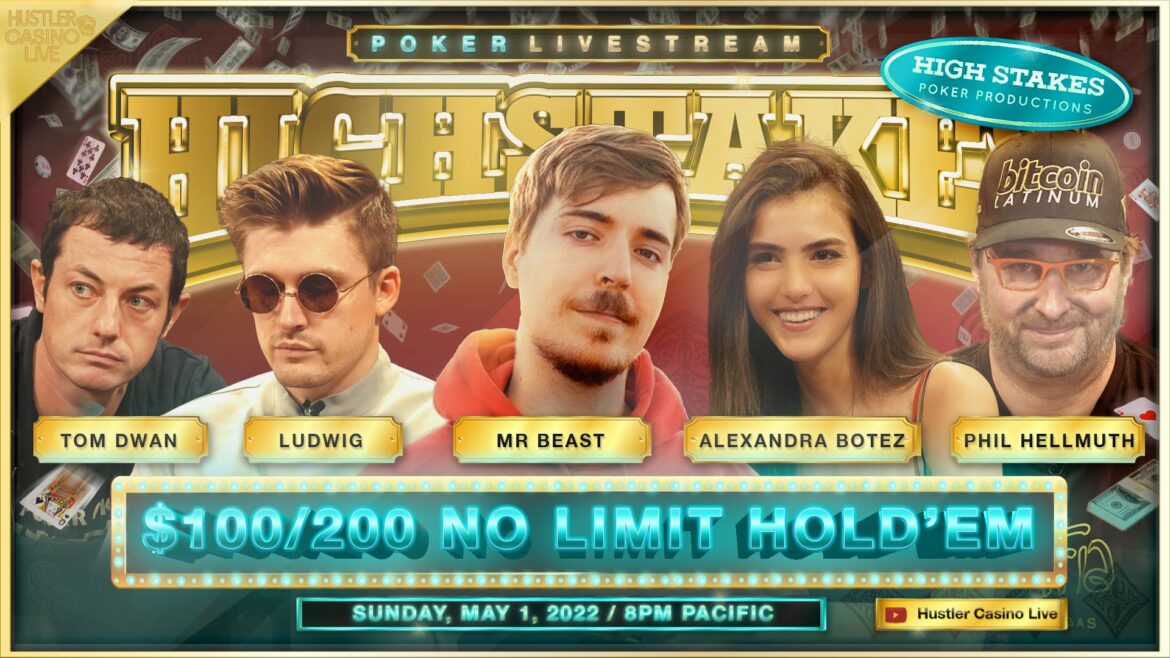 Hustler Casino Live has announced a massive lineup for one of its upcoming games, marking the return of Tom Dwan and Phil Hellmuth to the show. However, the eyes of many viewers are likely to catch on to the sensation of Youtube MrBeast, which will join some other well-known Twitch streamers as Hustler Casino Live seeks to take advantage of the success of other online entertainment platforms. .

The YouTube Sensation MrBeast is scheduled to appear on Hustler Casino Live with Phil Hellmuth and Tom Dwan, among others. (Image: Twitter / HustlerCasinoLive)

The game will have $ 100/200 blinds, some of the highest bets ever seen on the show, and will feature a full lineup that includes several Twitch stars such as Ludwig, Slime and Alexandra Botez, among others.

MrBeast, whose real name is Jimmy Donaldson, is an American star, businessman and American philanthropist on Youtube. He is best known for his extravagant Youtube videos, such as real-life squid games and other gift contests. Since then, MrBeast has ventured into the real world, launching the popular burger MrBeast Burger, as well as a chocolate company called Feastables. It has about 95 million subscribers on Youtube and several of its videos have more than 100 million views.

Hustler Casino Live co-creator Ryan Feldman has been trying to get MrBeast to appear on the show since he discovered that the Youtube star liked poker.

“We had a relationship with King Media / WPT Poker. They came to us to put on a show with great games on Twitch and YouTube. One of the streamers was Ludwig. I knew Ludwig was a friend of MrBeast because I watched his game of confrontation they broadcast some time ago “.

Feldman continued: “After the show, I was talking to Ludwig about MrBeast and how great it would have been to have taught them and Phil Hellmuth and Tom Dwan (because he knew MrBeast was friendly with Hellmuth and Dwan). Ludwig sent him a text message and in an hour he asked me if we could do a show this Sunday. Obviously that was all. “

The Twitch program that Feldman mentioned aired on Tuesday, April 26th. The lineup included the aforementioned Ludwig, along with Sykkuno, QTCinderalla and more Twitch streamers. This show had more than 5,000 viewers simultaneously on Hustler’s stream, and Alexandra Botez also aired it on her channel, reaching nearly 30,000 viewers there.

Feldman was very pleased with this flow and looks forward to the MrBeast show, telling us that he hopes to break records.

“I hope this show is the largest live audience in the history of live poker. We had almost 21,000 viewers simultaneously in the two days that Phil Ivey played. I hope this show surpasses it a lot … There is such an audience Twitch / YouTube, and a lot of that audience can go into poker. ”

Feldman has high expectations of how this upcoming game will be received by viewers and believes that the combination of the two genres can help “turn the show into something massive.”

The game will start on Sunday, May 1 at 8pm PT on the Hustler Casino Live Youtube page.

This site uses Akismet to reduce spam. Find out how your feedback is processed.

Other items of interest

Do you know our poker forum?

Comment on all the latest poker news on the CardsChat forum

The PokerStars UK webcam feature is extended to the desktop client